Secrets Of Successful Trading 1 – How to do something really badly 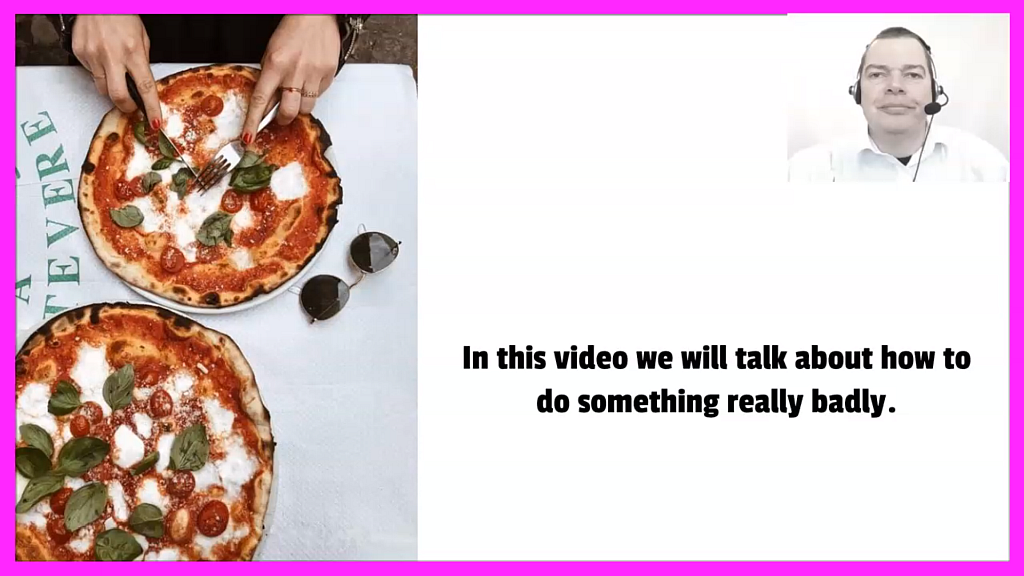 Hello and welcome to this video about the secrets of successful trading.

In this video we will talk about how to do something really badly.

Today my kids are grown up, actually I have to pay for their cars right now.

But when my two girls were toddlers, I had an idea.

I wanted to be able to produce really good Pizza, because this is what I like to eat.

I could exist from that stuff…

Have you ever heard the old slogan from Dominos Pizza?

Actually I don’t know if they still use it, but it was something like this:

Well, at the time when I wanted to produce my own Pizza we had no chance to get anything like that within 30 minutes.

We were located in a small village in Germany and it would have taken us about an hour to get a Pizza.

So I decided to create that stuff myself.

I wanted to create everything myself.

I wanted to create Pizza dough right away, because I didn’t want to wait for hours.

I wanted to create Pizza sauce myself, because I wanted it to be tasty.

I wanted to create everything with ingredients from the supermarket, because we had not much money.

And I wanted to be able to do all of that in 10 minutes, because I was impatient.

The first Pizza was really bad.

It took me far too long, it didn’t taste or smell good and I think you would have been able to use it as a trivet.

Actually we had to eat something else.

But a few days later I started a second try.

The result was not much better.

But I tried another one – and some more…

For weeks or months I produced more stuff nobody wanted to eat.

You could say that I have wasted groceries.

Nobody thought that it was a good idea to do that.

And not even my family wanted to eat that stuff.

I can’t tell you how much time it took me, but today it works!

My youngest daughter also can do it and in the last few years I have never had a complaint!

Nobody talks – or even thinks – about my first failed attempts anymore.

I guess those trived Pizzas would have been a good reason to give up.

The time and the groceries I have invested would have been tasty in other dishes.

And I bet during those first weeks my family would have gladly paid me to give up.

But today it works, because I dared to do something really bad.

I wasn’t qualified, I wasn’t talented, but I was determined to do it anyhow!

In 2007 I started to listen to so called podcasts on a new thing they called the iPhone.

I couldn’t understand much, because my English was really bad.

I never would have been able to write a single sentence in English.

But I was committed to learn it.

And today it works!

I can write, understand and even create content in English.

But I wanted to learn it.

I had failed in the programming course in school.

My nickname in school actually was “looser”.

My own father still thinks that I am not smart enough to do something intelligent.

But today my stuff is what comes up in any major search engine in the world for “MQL4 tutorial” or “MQL5 tutorial”.

So why do I tell you these stories?

Because the most important thing is: Do it anyhow!

Even if you have no talent.

Even if you are not qualified.

Even if nobody believes that you can do it.

Yes, there might be people around that can not find their own butt with two hands and a flashlight.

But if you are able to produce a bad result, you are also able to improve it in the next try.

In this video we have talked about how to do something really badly.

In the next video we will talk about a way to improve bad results on a consistent basis.