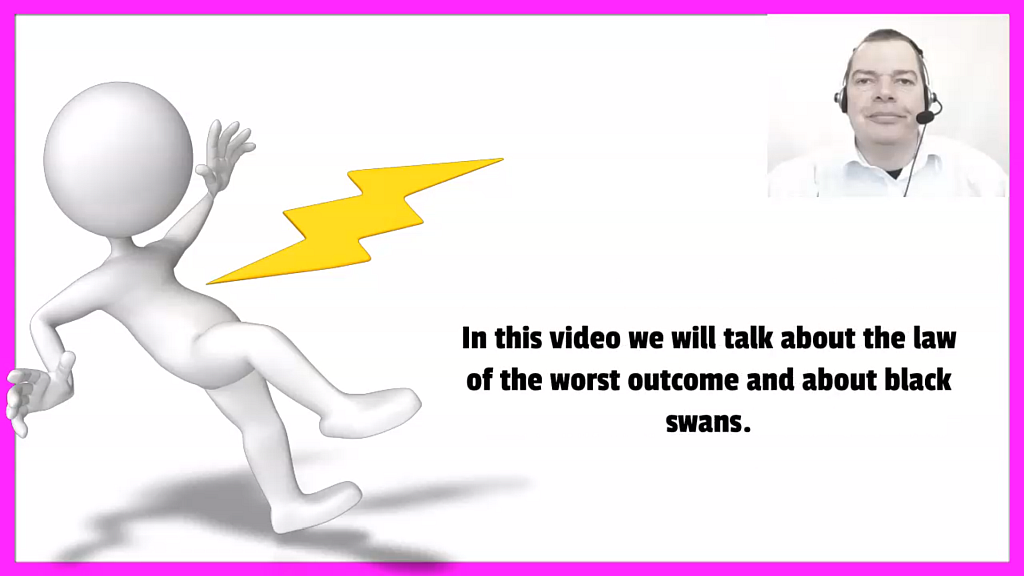 In the last video we have talked about the law of big numbers and how you can use it to improve your probabilities and avoid the base rate fallacy.

In this video we will talk about the law of the worst outcome and about black swans.

Have you heard about the black swan phenomenon that was described by Nassim Nicholas Taleb?

The short version is that no matter how many thousand people deny the existence of black swans, a single occurrence of a single black swan will disprove their assumption.

In 2019 a guy from Kenya managed to run a marathon in under 2 hours.

That is unbelievable fast, but now that one person was able to do it, other people will also be able to do it.

Like in that old story about Roger Bannister and the 4 minute mile.

Everybody thought it would be impossible, but several dozen people did it afterwards – within a few weeks.

Once people are convinced that the best possible outcome is possible, they start to believe it.

But there is also the opposite and that is the worst possible outcome.

The worst possible outcome is something like the world record for being struck by lightning.

If you read the Wikipedia article about Roy Sullivan, you will learn that this guy is the only person that survived 7 lightning strokes.

The probability for that is beyond what i can imagine, but if you have a closer look to that Wikipedia site you will see that there are a few things to consider.

Virginia has an above average number of thunderstorms.

Most people who have been struck by lightning were males between 20 and 40 caught outdoors.

And Roy Sullivan was a park ranger in Virginia.

This is a good example that the worst possible outcome will occur when all the bad things come together.

Murphy’s law about that is “What can go wrong, will go wrong”.

For trading the law of the worst outcome means that we need to design our trading system in a way that the probability to survive the worst possible outcome is above average.

Let me explain what I mean.

I do backtests for at least 8 years in a row to find the best setting for my system.

If you watch the result videos on AlgorithmicTradingSystem.com, you will see that the risk settings for a single year are sometimes high and it is possible to make a good profit.

But when you try to use the same high risk setting to trade 8 years in a row, you will have a very high probability for a total loss.

Therefore we need to adjust the risk setting to a lower value if we want to increase the probability to survive the worst outcome.

Most traders think that it will not happen, because if something worked yesterday it should work tomorrow.

The sub heading of the book “The black swan” from the trader Nassim Nicholas Taleb is “The impact of the highly improbable”.

If somebody would ask you to play russian roulette for a $1000000 reward – but you need to pull the trigger 50 times in a row – i would not take the bet.

So it is a good idea to do a lot of backtests to find out, what the worst possible outcome would have been in the last 8 years or so.

Afterwards you can adjust your system in a way, that might help you to improve your probabilities in the long run.

In this video we have talked about the law of the worst outcome and how to avoid black swans.

In the next video we will talk about a law that can improve system predictability in the long run.